Replace the iPhone cable with a card 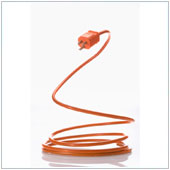 There's a funny commercial in Thailand where a guy walks into an elevator followed closely by a tiger. While the tiger prowls below we see the guy clinging to the roof. His sunglasses fall to the ground and the tiger looks up, in hopes of a tasty snack. The guy pulls his phone out and attempts to make a call, only to have his phone die. Smartphones are like that, they always seem to run out of battery exactly when you need them most. Luckily, most of never too far from a USB port, and so constantly carry the somewhat bulky charging cable. If you have an iPhone though, there's a new gadget that replaces the cord with a card.

Scheduled to release in December 2012, the Charge Card, (no, it's not a new fangled credit card), is a device that will replace the somewhat unwieldy iPhone charging cable. The concept behind the gadget is to replace the charging cable with something you can fit in your wallet.

The Charge Card is a credit card sized charging device which is .1 inches thick and made of a hard plastic. In the middle is a rubber USB connector that pops out and is compatible with any USB port. On the opposite end is a small 30-pin connector - the standard connector used by Apple. The 30-pin connector will work with the iPhone 4s and older; the iPad 3 and older; and any iPod. It is compatible with the new iPhone 5, iPads and iPods if you have the adapter.

How it works is you pop out the flexible USB connector, plug it into a USB port on a computer, TV, airplane seat, etc. and plug the other end into your iDevice. While it isn't a battery, it does allow you to leave the cords at home, and USB ports being pretty much everywhere these days, you can charge your device whenever you need to.

What is interesting about this is that the project was crowdfunded through Kickstarter, meaning people think it's a good enough idea to invest in it. You can learn more about the project here, and if you'd like to learn more about using the iPhone in the office, give us a shout, we'd be happy to chat with you.